UPDATE!!! Lashauna received her Surfer Girl/Angel Beach Oasis during the weekend of 10/24-10/25/09. She is enjoying her bedroom to the fullest and after a peaceful night’s sleep in her sanctuary, she feels inspired and empowered to go out and conquer the world, despite her disabilities. Go Lashauna!!

Lashauna is a very inspiring young lady. She has cerebral palsy, spastic diplegia type, and began her early childhood in a wheelchair. Her determination and perseverance contributed to her learning to ambulate with Loftstrand crutches at an early age and she sure covers a lot of ground with them. She graduated from a District 75 school in 2008 where she had perfect attendance and rarely missed a day of school. Lashauna independently chose to take part in a travel training program a couple of years before she graduated. This meant that she forfeited her seat on the school bus, which took her door-to-door each day. Instead, she chose to be more independent and took two buses to get to and from school with considerable walking. This also meant that she had to wake up extra early every morning. This is just a small testament to this admirable young woman’s character and strength. Because of her high motivation level, her charming and sweet demeanor, and her ability to advocate for herself, she landed herself in a program at AHRC. Through this program she has recently obtained a job at Rye Playland where she works part-time and recently moved into a group home in the Bronx.

She now lives in a house and shares a floor with two other young adults facing similar challenges. They each have their own bedroom and share the living room and kitchen. We are so proud of Lashauna and her accomplishments and very excited about her room makeover, which marks the beginning of her independent life. She was adopted at the age of 4 into a home where she received the basic necessities but very little love or nurturing. Despite the injustices she has faced, she is a warm and friendly young woman and lights up a room with her smile and laughter. She experiences neck and back pain every day from the stress and resulting tension ambulating with crutches puts on her body. Although she may not spend all of her waking time in her bedroom, we believe she is a deserving and worthy recipient of a Blissful Bedroom makeover. Please donate to make this possible.

Lashauna loves the beach and ocean, and during our consultation, she told us that she wanted a beach/ocean theme, as well as beautiful angels emerging from the deep blue waters. The Blissful Bedrooms volunteers can’t wait to get to work to give Lashauna her dream bedroom where she can rest, meditate, and conceive and dream.

Please take a moment to view Before and After photos of Lashauna's bedroom, as well as pictures of the bedroom makeover process. 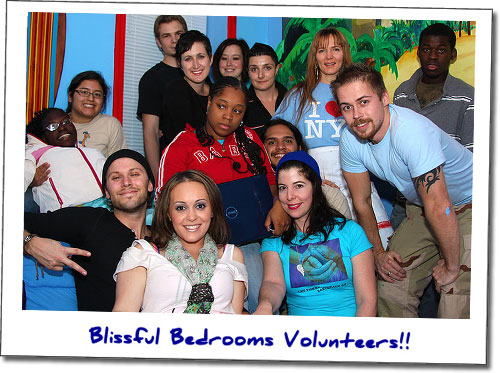