UPDATE!!! During the weekend of 11/18-11/20/11, A team of Blissful Bedrooms volunteers – TEAM ALBERTO – gave Alberto the WWE wrestling-themed bedroom of his dreams! More than 20 dedicated and talented individuals physically and creatively contributed to this act of love and compassion, and countless other individuals made donations to invest in Alberto’s happiness – ALBERTO’S ANGELS, making it all possible. Alberto’s room is now a totally cool, completely unique, wrestling-themed teenager heaven. He has a sanctuary, of which he was the ultimate visionary and designer, a place where he can escape from the challenges and rigors of daily life to feel rejuvenated, happy, inspired and peaceful. Even more remarkable than that, we wrapped our collective arms around Alberto and his family, and left their home with a palpable and all-pervading, loving and compassionate energy that is guaranteed to linger for a lifetime, and send ripple effects out into the world. There is something more self-assured and proud about Alberto these days! In fact his heart seems to have blossomed and opened and it appears as though he looks at the world through different eyes. The joyful and confident smile Alberto wears on his face lately is the highest compensation we could ever hope for! Alberto, may all of your days on earth be blissful and may you derive much enjoyment and happiness from your Blissful Bedroom. 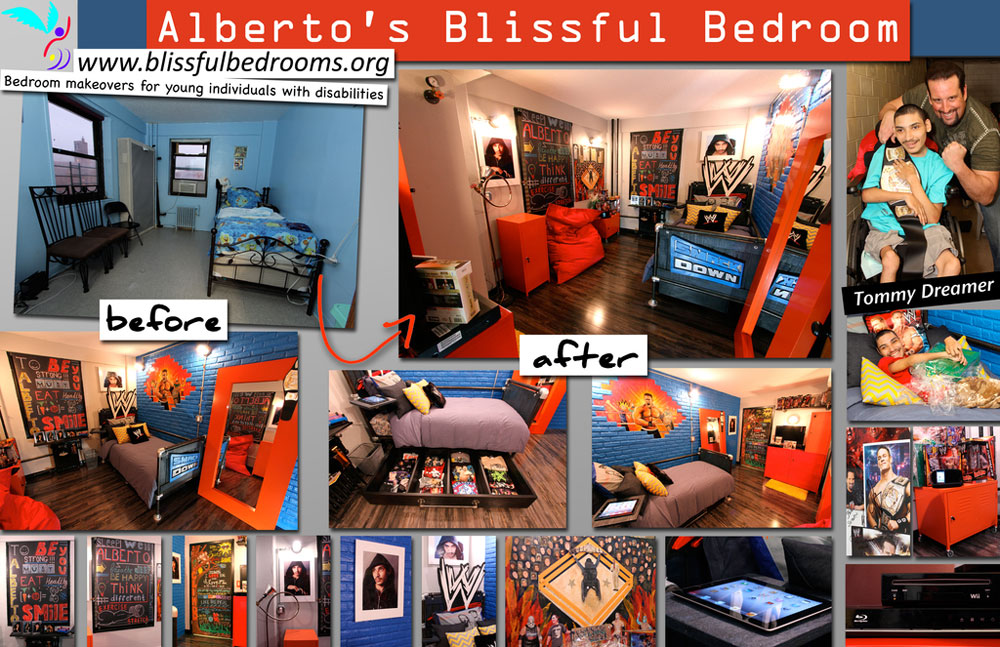 
Alberto is an adorable and sweet 15-year-old male, who has a radiant smile, and lovable and endearing personality. He currently attends a New York City Special Education school. Don’t let his shy, first impression fool you, he is a joyful, outgoing and affectionate young man who, in the past months, has been establishing himself as a “girl magnet” at the school he attends. He is becoming known as quite the romantic in his circles, and he loves kissing the hands of the ladies who touch his heart, as an expression of his love and admiration.

Alberto is challenged with cerebral palsy, spastic quadriplegia type, which means that both his arms and legs are affected. He is dependent on his caregivers for most activities of daily living, such as bathing, grooming, dressing, toileting, and transfers into and out of his wheelchair, etc. Alberto cannot walk, stand or sit unsupported. Recently, he accomplished the courageous task of learning to operate a motorized wheelchair and this has brought a lot more independence to his life. As a result, of this newfound freedom, his self-esteem and confidence are blossoming. Undoubtedly, his parents must feel immense gratitude for Alberto’s success, especially when they remember back to the first full year of his life, which he spent in an incubator in the hospital. Alberto’s strong spirit and will to live became clear during that time when other infants with similar conditions weren’t as fortunate as Alberto to leave the hospital.

Alberto has functional fine motor control of his hands and this enables him to eat independently, play video games, operate remote controls, joysticks and use a computer keyboard, mouse and touch screen.

Alberto lives at home with his beautiful and loving family – his mom and dad and two younger brothers – and he has his own bedroom. He is extremely excited about his upcoming bedroom makeover, which he says is going to be “AWESOME!” The Blissful Bedrooms volunteers will certainly do everything they can to ensure that it is! His passion and choice for the theme of his bedroom is wrestling. Alberto loves WWE and shared with us that he watches “Raw” and “Smackdown” faithfully. He adores many of the wrestlers, but three of his all time favorites are John Cena, Triple H and The Rock. Alberto has several favorite colors, which include yellow, blue, orange and red. When he is not watching wrestling on TV, he is playing video games. He also loves music and yearns to learn more about using a computer and/or Ipad. Alberto is not a big eater and mainly survives on soup and milk! However, we found out that he has a serious sweet tooth for McDonald’s apple pies!

Alberto spends most of his free time (when he is not in school) at home, in his bedroom. Blissful Bedrooms can’t wait to give Alberto a beautiful bedroom that he can feel peaceful, inspired and happy in for years and years to come. The Blissful Bedrooms volunteers, aka as Team Alberto, are preparing to make this charming and enthusiastic wrestling fan feel totally and completely “special” during the upcoming makeover weekend, rather than “special needs.” We have already gathered together to plan and design his space, which will contain original art work and custom designed furniture/accessories made exclusively for him.

Please take a few moments to view the photos from Alberto's makeover weekend, which include Before & After photos of his bedroom, pictures of the details and original art work, his reaction to the Revealing of his bedroom, the process of transforming the bedroom and the Reveal party celebration with past Blissful Bedrooms makeover recipients, friends and supporters.
Alexey Dvoryadkin, the Co-Founder and official photographer of Blissful Bedrooms, did it again! He captured Alberto's masculine, powerful and downright cool spirit in these photographs. Alberto was a natural during the photo shoot and easily slipped into his wrestling persona, while Alex snapped these beautiful photographs for for all to see, but most importantly for Alberto to see. A selection of these images were blown up and displayed in his brand new bedroom, so while Alberto kicks back in his new pad, he can gaze upon them and see what we all see in him - an awesomely handsome, charismatic and strong guy. Shine on Alberto and keep inspiring those who know you!
Video


Thank you to all of the beautiful volunteers – TEAM ALBERTO - who dedicated their hearts, shared their talents, devoted countless hours to Alberto’s happiness and went above and beyond to make his special weekend perfect!


Thank you to all of the generous ORGANIZATIONS/ BUSINESSES and INDIVIDUALS - ALBERTO'S ANGELS - who supported Alberto’s bedroom makeover by donating funds, services, food and/or materials. This makeover could not have been possible without your help!


Thank you to the Companies and Individuals who have adopted Blissful Bedrooms donation boxes, and to the generous and giving customers/people who contributed to the boxes. You helped us manifest Alberto’s dream bedroom! 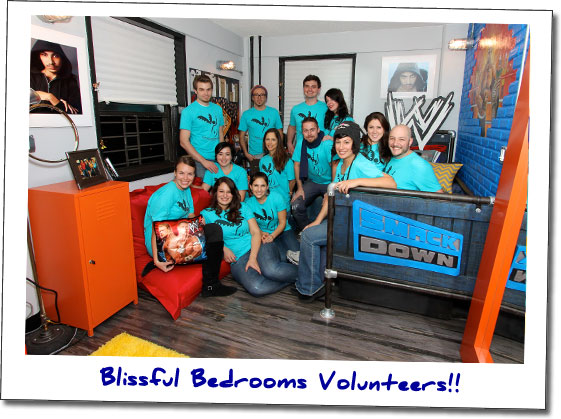